Hello and a challenge

Hello everyone and welcome to my new blog, Bobbins and Bustles! Here's a little about me. I'm 24 years old and currently a student. I used to sew a fair bit until a little over a year ago, when I stopped (it may have had something to do with starting my book blog, Megan Likes Books). I've decided to come back to it now, partly to pursue something I've always been intrigued by: cosplay. I'm a (not-so) closet geek and I've always wanted to dress up and go to conventions and the like, but I've always been too chicken. But not anymore! I'm planning to create an awesome steampunk costume inspired by a book I read recently: Etiquette & Espionage by Gail Carriger. While looking up some local conventions, I saw that she is actually coming to my city (hopefully, but not yet confirmed) in November to Pure Spec. I'm so excited and totally want to dress up in steampunk as one of her characters. And we'll see how motivated (and rusty) I am, I may even put something together for Calgary Expo.

But this blog isn't just about costume! I also want to make some more clothing to wear for everyday. So there will be lots of that as well.

So I want to start this blog off with a challenge: The 2013 Stashbusting Sewalong hosted by Cation Designs and EmSewCrazy! 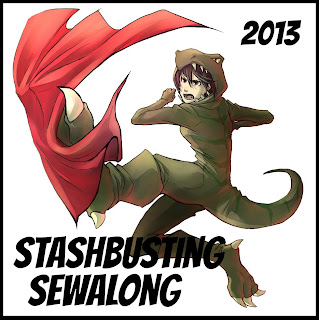 I'm pledging to use up at least 6 pieces of fabric from my stash by the end of the year and . And guess what? I was so inspired by this challenge, that I've already done my first one! I was playing around with trying to make a reticule (Victorian purse/bag), so I'll be prepared when I make one for my steampunk costume (it's really mostly Victorian). I'll  hopefully have a chance to take some pictures tomorrow and post them up. It's been my first time sewing in ages, so I spent so long deciding what to make that would completely fail due to my skills being rusty. Plus it fits with the January theme of using up those last bits of fabric from another project. I'll likely post up my stash photos sometime this week.
Posted by Megan R at 00:12