So I finally finished my Simplicity 2207 steampunk skirt and bustle. It wouldn't have been so bad if it wasn't for the 6 hours I spent trying to gather the damn skirt ruffle (more on that later)! Overall, I'm most happy with it and more than happy to have completed this project. In the end, I think it looked rather nice and, more importantly, it was finished in time to wear to Calgary Expo! Hooray! 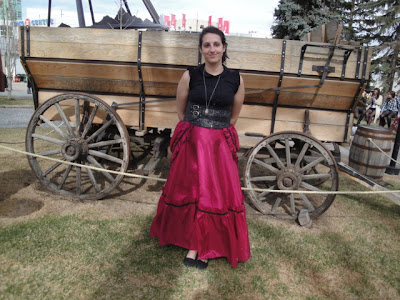 As I mentioned, the skirt ruffle gave me a ton of grief. I used an old rayon thread that most likely came from my mom or aunt's stash and it snapped so easily, any time I gave it a little tug. Multiple that by the approximately 5-6 feet of ruffle I needed to gather and it was a bit of a nightmare. I'd finally get it mostly gathered and then it was still way bigger than the upper skirt. This was after fighting with it for hours, so I made the decision that it wasn't worth it and just cut out the remaining portion of the ruffle. Done! So the ruffle is a less gathered than it's meant to be, but I don't think it's a big deal. Also, the ruffle is not as evenly gathered as I'd like, but after 6 hours of broken threads, I didn't care anymore and I don't think it's too terrible. Once I finished the skirt, I was not that enthusiastic about tackling the bustle. I had a time crunch (damn those deadlines) and there was a lot of gathering to be done on the bustle. Thankfully, I'd used up most of the old black thread and instead used some new stuff for gathering the bustle. Didn't break a single time. Thank goodness, or I'd probably have lost it. 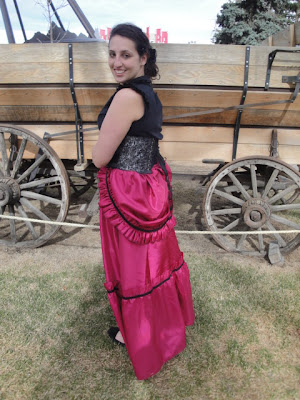 This project made me very happy to have Rosie the Janome in my life. Old Sally the Singer would have pitched a fit trying to cram the fabric and braid under the foot and it would have been messy and unpleasant. Rosie, however, sewed down the braid like a champ! She didn't even complain when one row of braid crossed another on the bustle. I love her so much!


I didn't make any changes to the bustle pattern, but for the skirt I lengthened the ruffles (because I'm tall) and added a full lining. I like the length, I got pretty lucky there, since I didn't make a muslin or really try it on first. The lining is probably the ugliest thing I've made in a while. I tried to follow the upper skirt pattern, then somehow managed to make it smaller than the skirt. So I added in a piece to make it fit. Then I decided to put in the elastic at the back of the skirt before adding the lining, so then the lining ended up being too big and I had to remove a chunk of the part I had added in. It was a combination of not following the pattern (I didn't want a lining ruffle) and not being 100% there mentally. So, needless to say, it's ugly. But no one can see it anyway and I'm very glad I lined it, since I don't trust the taffeta to be non-see-through.


Like I said, I'm overall pretty happy with the result. The ruffle on the skirt could be a bit more even and the taffeta  frays like mad, even on the edges I've finished, but other than that I'm happy. Would I make it again? Probably not. How many big ruffle skirts does a girl need?