Megan Makes a Quilt (or two)

As you may or may not know, besides this blog, I also run a book blog (Megan Likes Books, if you're interested). With that, I joined a group of fellow bloggers while I was living in Edmonton and we would meet up every month or so. One of them recently became a first time mom and another will be in just two weeks! Someone suggested we all make quilt squares based on our favourite childhood books and make them baby quilts. Everyone agreed this was a good idea and, since I'm the only one with a sewing machine, I volunteered to put them together.

And this is where I learned a few things from my first time sewing with others.

1. Don't expect everyone who initially agrees to follow through.

Of the people who originally signed up, a few had to drop out due to time constraints. We were already short on squares to begin with, so this meant fewer personalized squares and more plain fabric squares.

We agreed squares would be 6.5 x 6.5 inches. When the submitted squares arrived, some were cut a bit wonky, so lining things up was a bit difficult. One lady misread the instructions and her squares were quite a bit bigger. So I decided to be flexible and changed up my plans for the quilt to put her large squares in the center. They are the cute Beatrice Potter squares that she quilted to be kind of 3D, which is cool. 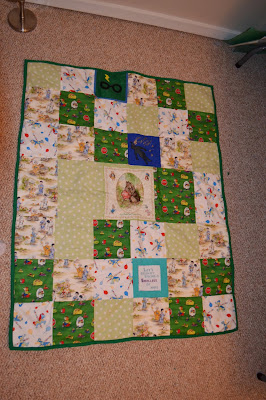 Once everyone's squares had arrived, I was feeling a bit of a time crunch, so I didn't make any personalized squares myself. I was also shocked how difficult it was to find bookish quilting fabric. I found hamburgers, but no books. I did find some Richard Scary fabric which I was loved and the little boys in the one fabric kind of reminded me of the boy from Where the Wild Things Are. The other two fabric are kind of generic baby.

The backing is a special baby fleece that I just thought was cute. The batting is some kind of natural fibre product in a package I bought because the store was packed and I didn't want to go back into the cutting table line (there was a huge sale going on). The edges are bound in extra-wide, double fold bias tape I originally bought to bind the insides of my Albion I'll be starting soon. But the ribbon I was originally going to use ended up not working out, so I made due. 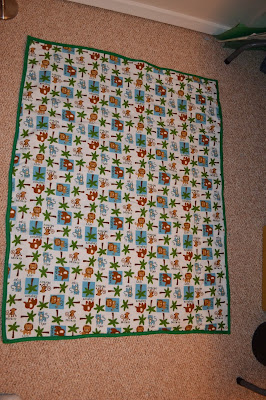 So this is my first time attempting a quilt of any kind. I think it turned out not too bad. Not everything lines up and the corners are a bit dodgy (on both, even though I tried a different method on each). It's not 100% square, as I found when I was folding it. Although it's nowhere near as bad as the angle of the photos makes it look. But I doubt the babies will care! And the mom's seemed to really like them! 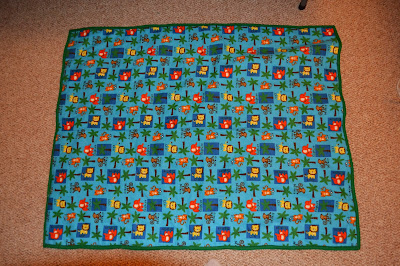 Do you recognize any of your favourite childhood books in there? Besides the Richard Scary fabric I mentioned, there's also Peter Rabbit, Peter Pan, Winnie the Pooh and Harry Potter! 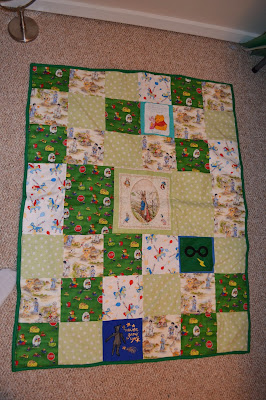 Email ThisBlogThis!Share to TwitterShare to FacebookShare to Pinterest
Labels: quilting